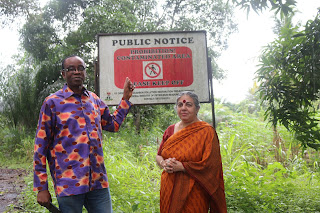 Statement by Vandana Shiva and Nnimmo Bassey at a Media briefing held on 27 July 2015 at the Shehu Musa Yar’Adua Centre, Abuja, to mark the end of Dr Shiva’s visit to Nigeria

Gentlemen of the Press,

We are living in a changing and challenging world. The change that has become our reality has not come about by accident. This change has been carefully planned, organized and orchestrated and the price has been dire. The driving force of the change we speak of has been greed and the power to exploit peoples and Nature without any sense of responsibility and with continually constricting space for redress. We live in a world that is not only unipolar but one in which a handful of corporations and entities control the global supply of food, water and power. In the quest for absolute control these corporations strive to merge and turn into behemoths of absolute power. Some of these corporations are already playing God by claiming to invent seeds and thus holding patents on the gifts of nature.

Oil companies and others locking the world into extractivism refuse to heed the call for tackling global warming at source by allowing 80 per cent of known fossil fuels reserves to remain underground and rather deny that global warming is happening; and when they agree it is happening they present a false path for action. False actions presented include carbon capture and storage, genetically modified crops, carbon trading mechanisms such as Reducing Emissions from Deforestation and forest Degradation (REDD) and geoengineering. These false solutions allow polluters to continue with their polluting acts and externalize the problems to vulnerable peoples and poor nations and communities through reckless pollution, land grabs and displacement of communities.

We are living in a chaotic, violent world. In history this violence has been marked by slavery, colonialism and imperialism. These continue today under different guises and are sugar-coated with the cloak of neoliberalism. Naked exploitation and despoliation remain the creed. Wars are prosecuted, nations are destroyed and people are massacred all for the purpose of securing access to oil, other fossil fuels and other resources to maintain an unsustainable lifestyle in a finite world. No wonder we see the sudden spike in interest on planets in other galaxies and universes that no human can expect to reach.

The Social and Ecological Destruction of Oil

Yesterday we were at Erema in Egi, Rivers State. Before then we had visited Ogoniland and seen the dastard pollution at Goi – a forgotten and totally deserted village. The people are groaning under severe oil pollution and loss of land. We shared ideas on environmental monitoring and protection, on the value of soils and the need to preserve our seeds and food systems. The interesting thing at Egi was that the cardinal request is that the Federal Government should enlist the help of the United Nations Environment Programme to conduct a forensic audit of their environment in a way similar to what was concluded on the environment of Ogoniland in 2011. They are not entrapped by current infrastructure politics. They simply want their soil back! We heard similar demands during the interactions at the Right Livelihood Lecture held at the University of Port Harcourt. Ken Saro-Wiwa was a fellow Right Livelihood Awardee (1994). We are here to pay tribute on the 20th anniversary of his execution, and to commit ourselves to continue the struggle for which he gave his life. We also the martyrdom of other Ogoni leaders who stood for justice and community rights.

The Egi people see their problem clearly as a human right issue. And they are right. The African Charter on Human and Peoples Rights declares that All Africans shall have a right to a safe and satisfactory environment in which to develop. The Egi people were quick to add that they want both the audit and clean-up of their environment to be undertaken expeditiously and not left to gather dusts on some shelves as has been the case of the Ogoni environmental assessment- four years after submission of the report.

The 2011 UNEP assessment of Ogoni environment showed incredible levels of pollution caused by the activities of Shell Petroleum Development Company (SPDC) and the Nigerian National Petroleum Company (NNPC). The report highlights that in over 40 locations tested in Ogoniland, the soil is polluted with hydrocarbons up to a depth of 5 metres and that all the water bodies in Ogoni land are polluted. It also reported that in some places the water was polluted with benzene, a known carcinogen, at levels 900 above World Health Organisation standards. With life expectancy standing at about 41 years, the clean up of Ogoniland is projected to require a cumulative 30 years to clean both the land and water. Meanwhile weekends in Ogoniland are marked by carnivals of funerals of people in their 20s and 30s.

It has been estimated that with rising global warming and shrinking water resources violence may increase in Africa by 54 per cent by 2030. Lake Chad is a major example of what looms ahead. The lake has diminished in size to less than 5% of what it was by 1960. The lake shrunk from 22,772 square kilometres in size to 15,4000 square kilometres between 1966 and 1973. Satellite images showed that the size stood at 2,276 square kilometres by 1982 and at a mere 1,756 square kilometres by 1994. The presence of invasive species over about 50 per cent of what is left of the lake further compounds the problem. This has led to the displacement of farmers, fisher folks and pastoralists that depended on it for their livelihoods. Although soil degradation and the management of the river systems that recharge the lake may be a contributory factor to its shrinkage, it is estimated that climate change and extreme and extended droughts triggered by it contributes at least 50 per cent to the current deplorable situation. If this is so, then ecological degradation and climate change are factors in the diverse manifestation of insecurity in the area, including the scourge of Boko Haram as analysed in the Manifesto Terra Viva, Our Soil, Our commons, our future which we have collectively drafted. Care for the Earth is the best antidote to the rise of insecurity, violence and terrorism.

It has been acknowledged that smallholder farmers hold the key to feeding the world. They also hold the key to cooling the planet because the agro-ecological food production enriches the soil rather than destroying it as industrial agriculture does. The Food and Agriculture Organisation (FAO) has just issued an illuminating report Agroecology to Reverse Soil Degradation and Achieve Food Security that buttresses this fact. We cannot afford to be drawn into a system that promotes genetically engineered seeds and organisms, and chemical fertilisers that do not deliver on any of their promises but rather have yielded a harvest of pains, deprivation and deaths. While these costly inputs make super-profits for giant corporations, they destroy our soils, and trap our farmers in dependency and debt. With over 300,000 farmers suicides already recorded in India, the harmful nature of this agricultural model is without doubt.

The pressure on Africa to adopt uniform seed laws such as those promoted under African Regional Intellectual Property Organization (ARIPO) is all aimed at seed colonization of Africa and must be resisted. The same goes with the promotion of GMOs through the weak Biosafety bills such as the one signed into law in Nigeria in the last week of the previous presidency. The unrelenting attack on our staple foods, including our cassava, cowpea (beans), corn and banana must be halted. The planting of genetically modified cotton in Burkina Faso was held up as a great success, yielding bumper harvests and enriching farmers. Recently Burkina Faso stopped planting Bt. Cotton. What example will they bring up next? Will Nigeria walk into that trap with her eyes open?

Soil, not oil is not a slogan but a statement of reality. Oil is a wasting resource and has wasted lives and now threatens the Planet. Oil economy is subject to political manipulation as we see with current price crash and the exposure of our countries to deep shocks. The oil economy is a negative economy on many levels. Our call today is that we must recover our sovereignty over our political structures, over our resources, over our food systems and over our lives. Soil, not oil. The soil is our life and our true wealth.

Always be updated with our latest news!

Do you want to get in touch with the WE-Africans?
Write to weafricanetwork@gmail.com