A Keynote presented by Nnimmo Bassey at the Lagos Water Summit themed: “Our Water, Our Right” organized by the Environmental Rights Action/Friends of the Earth Nigeria (ERA/FoEN) at Lagos, Nigeria on 11 August 2015.
—– 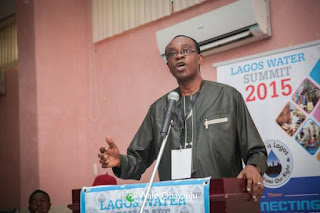 Water is a Right

Undeniably, water is an essential right without which no other right can be enjoyed. This is so because water is the basis of life. Every human person needs water in sufficient quantities to live and do so in dignity.

By its resolution 64/292 of 28 July 2010 the General Assembly of the United Nations recognised that the right to safe and clean drinking water and sanitation is a human right that is essential for the full enjoyment of life and all human rights.

At the time the resolution was passed some watchers had hoped that it would pass by consensus, however at the end of the day the resolution had to be put to the vote. Some countries abstained from voting while others rejected the notion of water as a human right. Little wonder that today, this right remains more of a notion than a reality. And this is why this summit should be a clarion call for all citizens of the world to rise up and insist on having and enjoying this most violated of the rights.

The enjoyment of this right is made difficult by a number of factors. One of the major reasons is the drive by neoliberal forces to control the common good. This is being pushed on the plank that government cannot mobilise sufficient funds to ensure adequate water for all. The fact that it is illogical to think that the private sector is better placed to mobilise funds than government has not stopped the peddling of this falsehood. The private sector obtains loans from banks at higher interest rates than governments do and they invest the funds so obtained in ways that assure them of high rates of returns. Private finance is not cheap.

Another factor that tends to promote the handing over of water supplies to private interests is the strong push that has come from the World Bank and the Organisation for Economic Co-operation and Development (OECD) countries since the 1990s. Additional avenues for moving public finance to the private sector is through the Global Infrastructure Facility and, for Africa, through New Partnership for Africa’s Development’s (NEPAD) Programme for Infrastructure Development in Africa (PIDA). All these promote private provision of otherwise public services. In one of its documents, PIDA urges African Heads of State and governments to serve “as champions of these projects. Heads of State and Government must set the tone, keep the momentum alive and provide critical national leadership by working together and showing an unwavering commitment to integrated policies, projects and goals. They should create an enabling environment for the private sector and they should ensure that priority commitments filter down through top executing agencies and ministries.” Turning Presidents into facilitators of these business arrangements is presented as “removing barriers to progress.” How more manipulative can anyone get?

These have been strengthened by heavy doses of Structural Adjustment Programmes (SAPs) that limit government’s investment in social services. The remarkable failure of the privatisation of water in several countries of the world has led to what has been termed the remunicipalisation of water services. This reversal of previous private deals have occurred in Bolivia, Argentina, Uruguay, Tanzania, Mali, France, Indonesia, Ukraine, Georgia, Kazakhstan and Uzbekistan to name a few. Indeed Europe has recorded the largest number of privatisation reversals. Yet the pressure to privatise water services remains unrelenting.

Some powerful nations have been the most hesitant to endorse water as a human right. The United States of America (2007) in a submission to the UN Commissioner for Human Rights said The United States does not share the view that a “right to water”—in any of the above formulations —exists under international human rights law. This view is informed by a review of the relevant instruments of international human rights law. Such a review demonstrates that there is no internationally agreed “right to water.” Neither the Universal Declaration of Human Rights (UDHR) nor the International Covenant on Economic, Social, and Cultural Rights (ICESCR) mentions water at all.

In that communication, the USA recognised various types of water rights – including rights held “by individuals, private entities or governments.”

Canada recognised the right to water only in 2012 in the run up to the Rio+20 conference of that year. Countries like the United Kingdom kicked against the inclusion of “sanitation” along with water and insisted that the right should be restricted to that of access. It is also interesting to note that some African countries abstained from voting when the resolution was put to vote in 2010.

Policy frameworks such as the Sustainable Development Goals (SDGs) are set to place emphasis on access to water rather than the right to water. The 6th goal of the SDGs is the only one that explicitly focuses on water. Note how it is framed, “Ensure availability and sustainable management of water and sanitation for all.” This is obviously constructed to pave the way for business as usual to prevail. In a situation where water supply has become a business and not a public good, it is clear that vested interests will determine who has access to water and at what cost. These vested interests are also in the driving seat of public policy and ply the myth that public institutions cannot be run efficiently or sustainably. When politicians say they would reduce the size of government what they are actually saying is that they would increase the slice of the public good that must be turned over to the control of vested interests or, in a more regular parlance, the private sector.

Shrinking Sources plus the scourge of Extractivism, Pollution and Destruction

The world is facing a water crisis and by 2025 all African countries will be vulnerable with regard to water supply and many would already be water stressed by that time. With climate change, increased flooding, droughts and desertification the hope of securing ample fresh water supply continues to recede. Lake Chad used to be one of Africa’s largest lakes. Lake Chad sits at the intersection of Cameroon, Chad, Niger and Nigeria. The lake has diminished in size to less than 10% of what it was by 1960. The lake shrunk from 22,772 square kilometres in size to 15,4000 square kilometres between 1966 and 1973. Satellite images showed that the size stood at 2,276 square kilometres by 182 and at a mere 1,756 square kilometres by 1994. The presence of invasive species over about 50 per cent of what is left of the lake further compounds the problem. This has led to the displacement of fisher folks and pastoralists that depended on it for their livelihood activities. Although the management of the river systems that recharge the lake may be a contributory factor to it shrinkage, it is estimated that climate change contributes to the current deplorable situation.

Meanwhile our water bodies are infernally polluted and in some places in our country Nigeria, men and beasts depend on the same water sources.

While our nations groan from the pains of lack of potable water, the extractive industries, large drinks companies, companies providing water and sanitation services to estates and towns, as well as the financial institutions investing in these businesses are the ones drawing up the solutions to the crisis. […]
Read the full keynote speech on Nnimmo Bassey’s blog

Do you want to get in touch with the WE-Africans?
Write to [email protected]